First and foremost, GOOD JOB RAVENS!!!  Someone ask me who I was for in the Super Bowl and I said without hesitation, RAVENS.  Their immediate reaction was !!WHY!! with that, what a weird dude, look on his face.  So I explain that the stats are pretty much the same and that the 49ers really never lost once when they get to the bowl so the only thing that can happen is them losing.  Otherwise it would be almost like a merical and I don't believe in those.  So the only other option is for the Ravens to win.  So the answer was, your crazy go sit in that corner...  Well guess what...  Thats right, I was right and he was wrong and I made a point to tell him that CRAZY GUY!!!

So the week started pretty easy, we got told Sunday afternoon that they're wouldnt be any PT Monday morning, so that open the door for me to perform my personal training and not be bothered which happen as planned.

Both trg session were good, other then the collision with an idiot who didnt look before crossing the track.  I say idiot as I am trying to stay polite as he made sure I was aware that he was an officer after swearing at me the way he did.  So I had to tape my ankle all day to help with the pain.

Another morning to do PT on my own, great!!  Then in the freezing -30 all day.  Thanks to unissued kit I was warm the hole day.

Today is not as fun, the crse had to go back to crse PT doing the same old and boring thing, BUT SURPRISE! SURPRISE! Would one of the staff read my blog??  The 100 pushups/100situps/15lap & 20 pullups has changed.  Now its 50pushups/50situps/50dips/15laps/20pullups, so basically same shit.  Lots of imagination.

SAME OLD CIRCUIT TRG IN THE MORNING i dont know how to tell an full of himself staff that he has no idea how to run PT.  So I tell myself, only 3 weeks left of that then I can go back to where I belong. 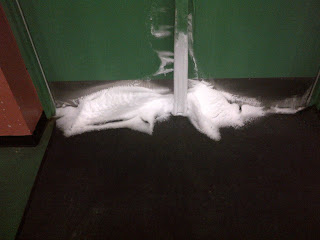 Like most of us living in Ontario/Quebec/ and on toward the maritime, I got woken up by gushing wind whistling in the cracks of the window.  Wind surpassing the 75kph.  Last time I saw that it was in Norway during a FTX in the mountain above the tree line.  We had to build an emergency snow cave to get shelter from the blizzard storm out there and we were stuck in there for days. 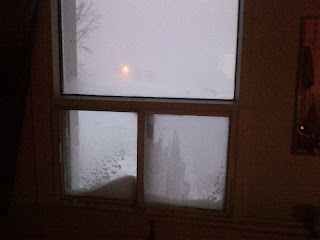 Then I get up for a swim practice with the local team, to find out that they have cancelled the practice in prevision for the storm.  Who cancel a swim practice while its done inside.  There is no snow or wind in that pool trust me.  So I show up, wait and wait again, no one showed.  But thats ok, I had a plan.

Than i'm done for the day, time to study for the test first thing in the morning monday.