Watta race!  Against all odds, best race results of the year once again.  This year is looking good, one best results after the other.  Since my race season started back in March in Clermont Florida, I have been doing better and better every race.

This passed week-end did not fail to the rule.  Early Sunday I got up as I usually do, eating my usual breaky at a minimum 3 hrs before race schedule to start.  As the weather network had predicted, the condition was less then desirable.  It was cold, and by cold I mean 10 oC, it was raining, and the wind was best suited for a sailing race then a triathlon. 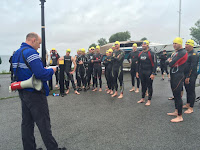 So once I got to race site, prep the transition had to be for condition, my running shoes placed in a plastic grovery bag and finding a way that my bike wouldnt get blown of the rake.  But I did.  Once that was done, we did things in a typical military fashion, HURRY UP AND WAIT, but we added the freeze.  So to keep warm I did few extra warmup exercises.

Finally we got our race brief, once that was done, in no time the race started.

Unfortuntinetly the swim had to be shorten by few 100 meters since the race director had a hard time making them stay in place.  So short moment after 0830hrs the race started.  With the whistle we went.  As expected I got out of the water first with about 2 minutes ahead.

Transition was fast, dealing with the slippery parade square I pickup my bike and I started the 40km.  Wind and gust of wind, rain and sideway rain was part of the race.  Taking slow corner was the safe thing to do so the bike could have been a little faster.  Still happy about the results.  I clocked my bike time just over a minute faster then the next fastest results.

Finally the run, well this run was epic, I ran a faster pace then the 5k CAF National Running Championship over twice the distance on a wet and slippery terrain with hills and 50% of this run was on soak grass.  But I loved it.  I have trained few times on this cross country race course, in dry condition and I have to say, it was more gentle on the knees and ankle that way, thanks to mother nature.

So I was first pretty much the whole race but at the 6km mark, speedy gonzales Billy Bostad passed my like I was standing still, it made me feel bad for a moment but then I realized that Im still second which is pretty good one its own and if I wanted to stay in the second spot I had better too keep hustling.

Some toute, I had a great race, thanks to all the volunteers, and organizers.  Same to all the participants who shown up in such a terrible weather condition.
Posted by Unknown at 6:52 PM