One last race before I leave Kingston

This weekend was the 32nd Annual K-Town Triathlon held at the heart of Kingston Ontario. This race is the oldest Triathlon in Ontario and is one of the most significant races for points at the Ontario Long Distance Triathlon series. 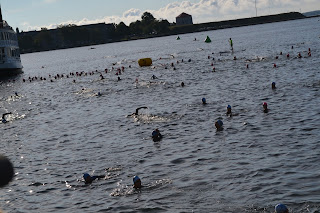 In the past 2 years, this race has been the dark hole for me; I always suffer from heat or lack of food or both. So since the rule of three often applies, I was very nervous. I wanted to finish this race well this year since it might be the last time I do it.

Well after the gun shot, I started in the lead. Everything was going well; I managed to keep my heart rate low and still pushing real hard. At the second buoy we had to do a right turn. Since the sun was directly in my eyes, I couldn’t see one of the buoys toward Fort Henry so I lined up towards the next one I could see which brought me off course by at least 150 meters. At which point an official kayak came to tell me I was off course and I had to double back. When I finally saw the buoy, I was far from everyone, so I surge back trying to catch up. Once I got back to the led pack, I was spent, so I stayed with the group trying to gain energy a little so I could have a decent bicycle portion has it is very demanding. 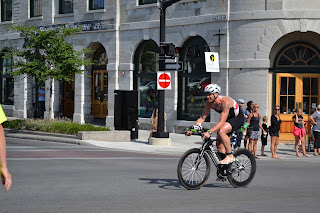 The bike course didn’t fail to be hard. Starting with the big hill on HWY 2, I took it easy trying not to explode my legs. Once up the hill I sat back and went to work. Everything went very well. Couple racers passed me, while I could tell in their faces they were working extremely hard, I knew it was not the best thing to do. HWY 2 has this crazy wind that will crush everyone who doesn’t respect it. Once we passed the turn around, there was the wind. For those who worked so hard on the way out, got surprised but I knew better and I was ready. Little by little I moved closer and closer passing one racer and getting real close to the other. Unfortunately the course wasn’t well marked and that athlete ended up not taking the right turn and got removed from the race. 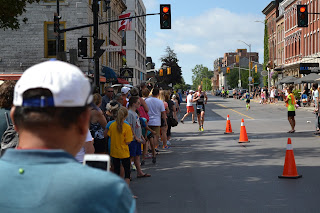 Finally back into the transition, got into my running shoes quickly to hammer the run course. The course was challenging as usual and the lack of volunteered made this a little difficult to say the least. I started the run with a very fast pace, I wanted to slow down to conserve energy right off the transition but for some reason I felt really good and so I went for it. The first 5km were real good. Just under 20mins split has been my fastest 5k this year. The next 5 km was challenging, up down turn, etc were there for our pleasure. At this point I could feel the other athletes coming close, I was getting really nervous. The final 5 km was real torture. The heat was hitting me, and the lack of energy started to manifest its self. But I held on for dear life. I got passed by one other racer which I was ready for and tried to draft off of him for couple minutes. 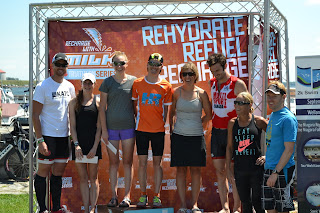 The final sprint had to be inexistent. I had no energy left, I looked back and there wasn’t anyone. Even if I always want to give an extra push at the end, this one wasn’t going to be. I just held on and cross the finish line.

Finishing 3rd in my soon to be ex hometown, in front of friend and family and also very important, local sponsors, made this day very special. 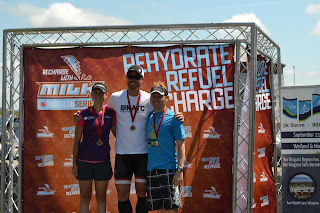 Thanks for everyone’s support.

Thanks for my friends and family!