Once again this year I finish in the top 5.  Triathlon Olympic Esprit de Montreal, was just a testing race.  A race that had for goal to get the speed in the legs for shorter distance as I am use to long distance triathlon.  The reason for that is the fast approaching of the World Military Games coming up in October in Korea where I will be participating to the Olympic Drafting Legal Triathlon.  This race will bring together all the fastest soldier on the planet.  Everyone’s goal is to have the fastest team mate on the podium.

That being said, the plan to get the speed in the legs worked well.  I was expecting fast, but not that fast.  I had told few people that I was shooting for sub 2 hours tri, but I felt like I was over reaching, not because I couldn’t do it, but just because I felt like I wasn’t in the best shape for it NOW.
Well I travel to Montreal on the Friday and get set up with my race registration and athletes check in.  Then I did a quick activation on the race course.  My bike speed was there, I had reach some incredible speed and power output.  The swim speed was there too. And the run felt light.  So I packed up my stuff and moved to the accommodation arrangement.

On Saturday, the weather wasn’t super, the rain made for a dirty bike crse and I had arrived a little early, so I decided to do something real quick, for a total of 45 mins activation only.  The plan was to do at least one hour maybe more.  But I felt like I was in the way and it was cold and wet.  I just didn’t really felt like it. 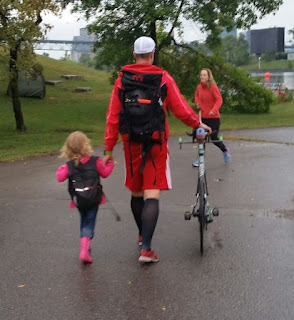 On Sunday, I got to the race site super early so I could get a good parking spot.  For me the wake up time still wasn’t too bad since I get up at least one hour earlier for the long distance I take part of usually.  So you can call that sleeping in if you will.

Once I got my truck parked, my family and I proceeded to the transition.  I set my bike with the scrutinizing eyes of my 4 years old daughter, in the transition.  There was so much space it was quiet unusual.  I did a transition recce and visualized my way in and out of the transition couple times.  Once that was done, I got out and spend some valuable time with my wife and daughter while I got some warm-up exercises and stretching done.

As I was waiting there, getting my wetsuit ready, the announcer indicated the race was none wetsuit legal.  See, there is multiple triathlon organization out there and everyone has rules that resemble each other, but there is always one or two things different from one another.  The wetsuit temperature and the wear of a speed suit.  Well I was ready for a “none wetsuit” race and I brought with me a speed suit.  I was fortunate enough to have a local vendor telling me I wasn’t aloud of those either.  Thanks god someone told me, otherwise I would have gone with it and get disqualified.  After such a great results the last thing you want is a DSQ beside your name.

So after few more moment, the race started.  I was in the front most of the swim, one other strong swimmer had spent most of the swim in my feel and I felt like it was my time to rest a little so I slowed down a little to let him past me and I drafted the last 500 meters.  Just enough to catch some rest before the bike. So after a solid swim which took me a little less than 21 mins I passed him in the transition and never looked back.

The bike part was challenging, it rain hard and there was a lot of competitor on the course.  Cornering was stressful as you can’t predict what the other will do and the road was extremely slippery.  I still managed to have a super strong bike split with just a little more than 57 mins. 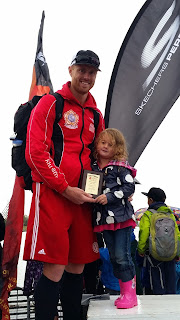 Has I got out of the transition after the bike I looked at my watch and saw that if I could maintain a run speed just a little faster than my usual pace I could have chances to make it under 2 hours.  I was very excited but also worried that I would go too fast too soon.  So I picked a pace that was just suffering enough but not too much that I would be able to have a great finish.  After 5k like that I felt like I could speed up the pace by few second per km, so I did.  It turns out to be the right move.  I finished the race with a run time of 38 mins which happen to be my fastest time this year and a total time of 1 hour 59 mins 20 secs.

This was the best results I had even have in Montreal, ever.  I also finished 4th overall and 2nd in my age group.  Two teammate from the Canadian Armed Forces Triathlon team passed me at the very finish, but it didn’t matter because I am getting closer.  Those guys have the habit to beat me by several minutes over this distance.  Making it hard for them just made me happier.  Their sportsmanship was also very good, they encouraged me and congratulated me for my improvement.  I couldn’t ask for better friends.
Posted by Unknown at 5:03 PM